A Home for Christmas 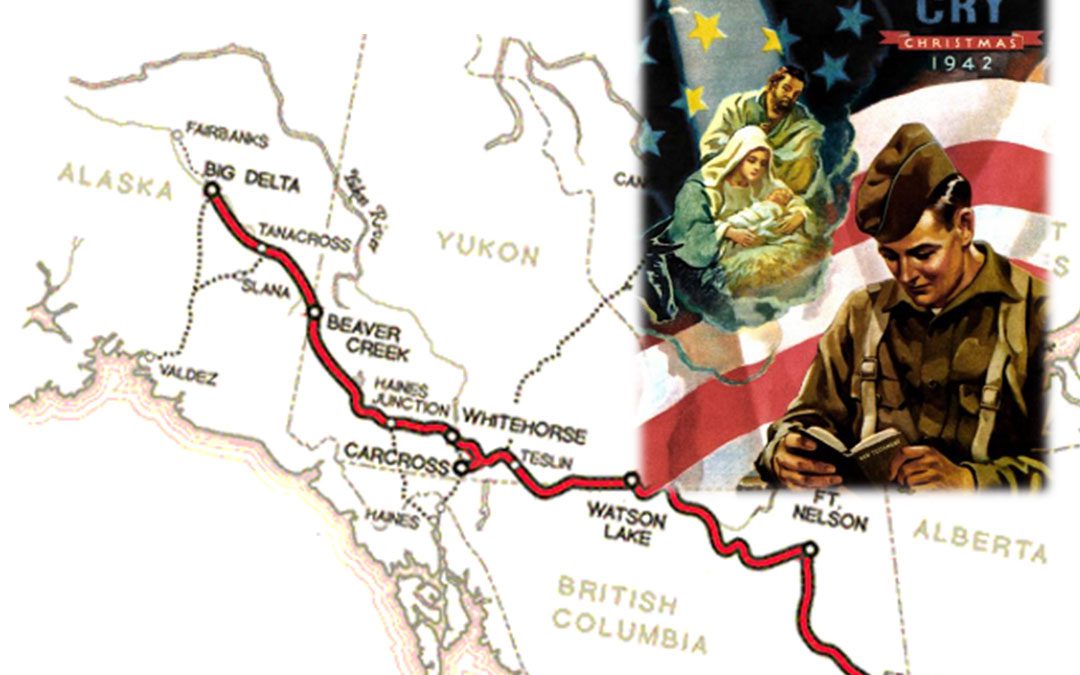 It’s always tough to be away from family during the Christmas holidays, especially when it’s your first year apart from them. Many young American soldiers found themselves in this position when they were building the Alaska Highway in 1942. Only a few were lucky enough to get time off to go back to the United States for the holidays.

One North Peace Family, the Matthews, reached out to some of these homesick soldiers and arranged a special Christmas surprise for them. Wendell (Bill) Matthews recorded his memories of this special Christmas with some American Medics stationed near their family farm to the east of Fort St. John. Here is the story in his words. 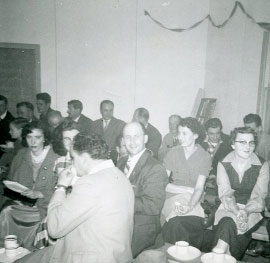 Bill Matthews (balding man in middle of photo) at a party in the Matthew Subdivision Hall in 1958.

Many years have passed since the American soldiers we befriended during World War Two were stationed here, and yet every Christmas our mail box bulges with cards and letters from them – and their families, revealing they still recall the Christmases they spent with us here on the farm.

Let me tell about one Chistmas,when my mother and younger brother, Doug, and I did our best to create a homelike atmosphere for the America boys in uniform.

Soon after the United States entered the war, the construction of the Alaska Highway began, and an American Army base hospital was set up in the village of Fort St. John, B.C. to take care of construction casualties. 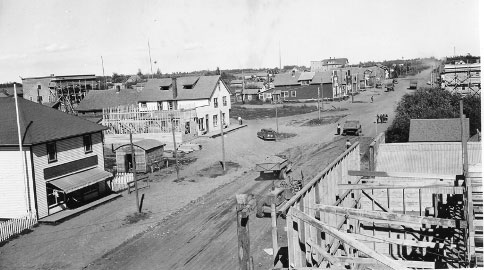 Our farm is located only two miles east of the village, and one Sunday atenoon five U.S. Medics out for a hike in the district inquired for drinking water at our house. We were having tea just then, and mother invited the soldiers to join us. They gladly accepted, and it was a happy afternoon in our house, with much fun and laughter going on.

After tea, we showed the fellows around the farm. They were delighted with the horses in the corral, and all five went riding until suppertime. As soon as supper was over, the Medics had to rush off to camp for night duty, with an invitation and assurance from mother that they would be welcome the following Sunday to a chicken dinner. 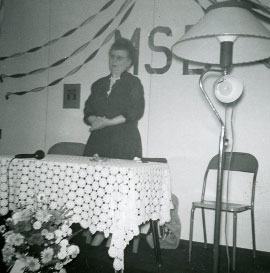 Next Sunday, the soldiers were in time for dinner. However, they brought along three more buddies. Fortunately mother had foreseen a good appetite, and there was plenty of chicken to go round. Mother was fondly called Mom by all and this title was given her for the duration of the Medics stay in Canada.

From then on seldom a day passed by without a soldier or two dropping in on us, and Sunday always meant a full house. Although it created tremendous work and cooking for mother, she was happy to have the boys come to the farm rather than go places where drinking was one of the few meagre amusements our village could offer. All the soldiers who came to our house were clean young men, mostly separated from their families for the first time. Therefore our mother considered her extra work a worthwhile effort, and her advice in settling personal differences, or her encouraging words to Army gripe were helpful to many.

When the weather turned cold, and snow cut outside activities to a minimum, the boys enjoyed coming to the farm to sit by the fire, and be treated liberally with mothers cakes or cookies with Doug and me. Several of the boys played instruments, and there was always much music and singing going on which I often assisted with my piano accordian.

With Christmas approaching, Silent Night and other carols were becoming favorite songs , and talk would always turn to loved ones back home in the States. All wished they could go home for Christmas. Two or three did manage to get special furloughs, but the rest were not so lucky, as the base hospital was always full with sick men and construction casualities from the Alaska Highway, hence their services were needed. Our mother however invited all the boys who would be off duty for Christmas dinner, and promised them a superb feast.

A Plan is Hatched

Then one evening after the boys had gone back to camp, mother thought of a splendid idea. Immediately I got the typewriter out and wrote a letter as she suggested. I made plenty of coppies one for the parents of each soldier. The letter explained how their sons and his buddies were invited to our home for Christmas, and that there would be a big tree with some useful present underneath for him.

We asked the parents if they would care to join us in surprising their son by sending a present and pictures of the family, to be placed under the tree. Also, I wrote, at midnight on Holy Eve a toast would be given by their son and us to their health, and if they would do likewise, in thought we would be together then.
Next day, Doug and I looked up the commanding officer at the base hospital. We told him of our pending Christmas surprise for some of his men. Very enthusiastic, he promised to have all soldiers in question off duty on Christmas Eve. We also obtained all proper addresses in camp, and sent the letters from Fort St. John by airmail.

During the last few days before Christmas, letters and parcels of every size arrived from the United States at our house. For our mother came letters from grateful mothers of soldiers, who thanked and blessed her for taking their places. All promised to be on hand for the toast at midnight on Holy Eve, to be near to their dear sons in thought for but a moment. And those from New York and other Eastern States were certainly going to drink a toast at 3 A.M. to make sure of the right time. Beforehand, we had not realized how much this suggestion would mean to those dear people.

Christmas Eve, the boys arrived early, and helped Doug and I with decorating the tree. Much pleasure was derived from it, as everyone tried to decorated similar to what the tree would be like back home, and “Mom” was called away from her work in the kitchen many times to give her opinion as to where a certain decoration would look best.

Because some of the boys had to be on duty on Christmas Day, the festive dinner was served on Holy Eve. And what a dinner it was! With turkey abundant, for we raised our own, and with wild cranberries from the farm, and all those other good eats mother had prepared, the boys ate hearty and were merry. After dinner, some of the boys helped mother with the dishes, while our orchestra played requested carols, and every one sang.

At half past eleven, mother confined us to the kitchen while she and Doug arranged all our things under the tree. All photographs and pictures were placed upright under the tree with the proper presents and letters for each below on the sheet covered floor.

A few minutes before twelve o’clock mother reached each one of us a glass of wine, with instructions to drink it before the tree with thoughts of home, a toast to loved ones.

We entered silently into the darkened room where Doug was busy with lighting candles on the tree. When the radio announced twelve o’clock mother spoke: “Drink your toast boys, and don’t forget that your dear ones back home are thinking of you at this moment also!”

After the toast we sang Silent Night, and while we were singing the boys recognized the pictures of mother and father, sister, brother and sweetheart in the candle light. Yes, and tears of comprehension were in the eyes of many just as they were in Mother’s, Doug’s, and mine. For after all, we believed that we had succeded in making the boys feel at home for Christmas.